Atlanta, Georgia is home to many fortune 500 companies that attract international trade and business to the peach state. In fact, international news giant CNN headquarters’ are based in the southern metropolis. However, beyond the steel towers and sharply dressed business-people there is a dark underbelly that has been increasingly investigated and been slowly brought to the forefront.

In the early 2000s, the organization began working with girls that were charged for prostitution. The average age of entry into prostitution is 12-14 years old even though the legal age of sexual consent in the Georgia is 16 years old.

Director Jennifer Swain explains that “historically, there are a lot of reasons Atlanta has attracted human trafficking. There are multiple conventions here that attract millions of people from around the country. Because Atlanta is the capitol city, there’s access to the ports of Savannah and Hartsfield-Jackson International Airport. There are also a lot of truck drivers that stop here in the metropolitan area.”

All these little pieces add up to create a massive bureaucratic problem that can’t be solved overnight. It occurs right under our noses. Social events in the 1990s, like “Freaknik”, involved  all forms of prostitution which eventually led to its inevitable demise.

Technology and the increased use of social media in our day and age has made sex trafficking easier and much harder to police. Online activity and sex trading happens in mid daylight yet there is still little awareness on the topic.

The key factor for this activity is the demand. In 2009, Youth-Spark decided to spearhead the Georgia Demand Study. They set up fake ads online, in magazines, and attracted unsuspecting johns into a sting operation to profile the types of people interested in such activities.  According to Swain, “the ads promoted young-cutesy-girls because young-cutesy-girls would get more clicks and more traffic. Warnings were sent to let them know that the girls were under age. 7200 men knowingly or unknowingly seek to purchase sex with adolescent girls.” They had willful ignorance and most of them continued through the process.

Through the exercises and the sting operation, the Youth-Spark organization came to the realization that police officers needed to be trained for capturing and profiling johns. The reality is that the police is one of many public services that are being affected by governmental budget cuts. So the training may not become a reality anytime soon.

Law enforcement, lawyers, and judges are unaware that domestic trafficking looks different than international human trafficking. One of the key differences is the culture in which we live. Americans believe that they are independent thinkers and masters of our own destinies. “We believe that if a girl is on the streets prostituting, it is her own freewill that guides her into that lifestyle but that is not the case and it is not always so simple to explain, ” states Swain.

The root of the issue shifts from the pimps, traffickers, and johns to the young girls that are being sold and paraded.

The second and most important factor is realizing that physical movement is not required to be trafficked. Swain adds that “changing the  word drug for human, the only thing that is different is the product. A young girl can be kidnapped and force to prostitute in the same locale, city, county, and state.”

Over the years,  the laws in Georgia has stiffen in regards to the pimps but the johns have been able to wiggle free to some degree. However, if an adult is caught having sex with a minor, he or she will be imprisoned. Georgia Attorney General, Sam Olens, have partnered with Youth-Spark to create the Georgia is Not Buying It campaign. This campaign hopes to extinguish human trafficking in Georgia.

The bulk of the trafficking legislation took place in 2011. State legislators continued with even more with recent laws taking affect January 1st of this year.

*This article is just the beginning of a long series of articles that tackle human trafficking in the U.S and worldwide . Issues such as laws containing to human trafficking, survival sex, and gender will be tackled. 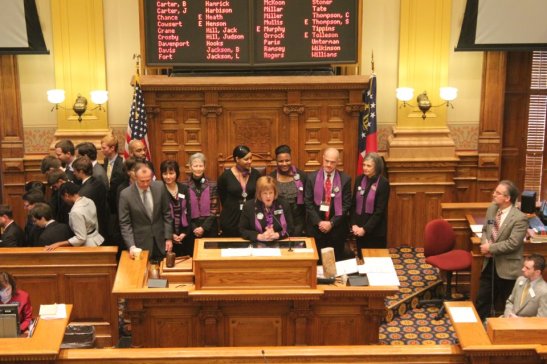 2 Replies to “Human Trafficking is a Deep-Seated and Persistent Trend in Atlanta, Ga”