Less than half of the states in the U.S recognize same-sex adoption outright

The Child Welfare Information Gateway reports that there were an estimated 400,540 children in the foster care system. Most of these children won’t have homes that they can call their own. In fact, they may stay in the foster system until they are legally forced out at 18 years old.

The laws for LBGT couples adopting children are complicated and unspecific in most states. However, in recent years, the States that legalize gay marriage adopted laws that favor adoption for these couples. There are twenty-two states, District of Columbia (1995), and Guam that is clear on this issue. Those States that allow same sex adoption outright are:

With the many legal gray areas, same- sex couples must think outside of the box to get the family they want.

Trouble Down in Texas

John Skinner and John Milner have wanted a family with multiple children for 15 years. They moved from North Carolina to Atlanta in 2007, because there were laws against same sex adoption in that state. Three years later the two started the adoption process. They were directed to the Mega Family Project dedicated to LGBT adoption cases where a case manager contacted the Giving Tree adoption agency.

The couple searched for children in Washington State, California, Ohio, and Texas. ”We wanted kids between the ages of 5- 12 years old. We were offered kids that no one else wanted. We were a last resort for the children (they presented to us).”

Then they finally landed in Texas where they found 16-year-old Michael and 13-year-old Zachary. Oddly enough, “Texas has an easier path to adopting children than Georgia” said Skinner.

However, it still was not easy. Throughout the process Skinner and Milner suffered prejudice.

While trying to negotiate the terms of Michael and Zachary’s adoption in Texas, their caseworker warned them not to ask too many questions.

“Texas lost our paperwork, delayed the children and if we questioned Texas they would have stopped the adoption process all together. I (John Skinner) had to apologize (for asking questions).”

All of the legalities had to take place in DeKalb County, GA where the two live. There were a few judges that had a problem with same-sex adoption so their attorney recommended them to adopt on National Adoption Day (November 25th) because there was a judge that dealt specifically with same-sex adoption.

The two boys (Zachary and Michael) were in group-homes for 7 years. They are two children out of five siblings that were all placed in different foster families.

Skinner believes that “the foster care system is not designed for the child. The foster-system misdiagnoses children to get more money for the child”.

Along with the prejudice, the Kids (Michael and Zachary) had medication they did not need. Michael had six prescriptions but only needed two. Also, there were kids (they wanted to adopt) with misdiagnoses that were not true.

Even with all the trouble, the couple continues to try to add to their family. 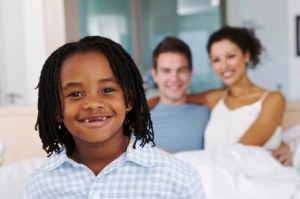 Wayne Scott and Stephen Williams, Jr. had a different set of issues when they decided to adopt. February 2010 mark the beginning of their journey into the process and it took them two years to get things done.

They went to the Giving Tree adoption agency and the agency sent their home study to a Wendy’s Wonderful Kids recruiter, who works for Bethany Christian Services. It was this recruiter at Bethany Christian Services that matched them with their son, Devin. He is a type one diabetic and has ADHD. However, those medical conditions were not the issues halting the adoption.

“I don’t know if it had something to do with people’s prejudices or the system itself. When the children are young enough they have no say [in the process], however when they are old enough they have more of a say over the number siblings, [rather or not] they want a mom and dad, two dads, or two moms. These questions empower the kids. Devin did not care. He said ‘I don’t care if they have horns coming out of their heads … as long as they love me [that is what matters]’.”

He came from a house with two conservative preachers foster parents that did not approve of homosexuals.

“The previous family tried to sabotage but we had a very supportive staff behind us. We picked him up at school and we met all of his teachers and school staff. When Devin came up to visit us, we taught him how to ride a bike. He never learned how to ride.”

Once he was playing by the pool and Devin fell and scrapped his knee. The former family said that every time Devin stayed with them that he would have new injuries. Devin talked with pediatrician and told him the truth that no one was hurting him.

The foster parents did not keep Devin in school. He had poor attendance in school.

Normally, prospective parents are not allowed to meet a child until they have formally decided that they are going to adopt that child.

This is necessary so that the child does not feel rejected by potential parents that, after meeting the child, decide not to adopt him/her.

“It can also be very difficult for a prospective family to make a decision about adopting a child when all the family has is a written profile and some additional limited information, the amount and nature of which varies from child to child.”

At first we were not sure that Devin was the right child for us – we had a lot of questions and concerns based on the information that had been provided to us.

As a means of abating some of the concerns that we had our agency worked with DFCS to coordinate a “chance” meeting in which Devin would NOT know that we were meeting him as potential parents.

This article was unpublished and unfinished. It was intended for HLN.com. This is the unedited version.